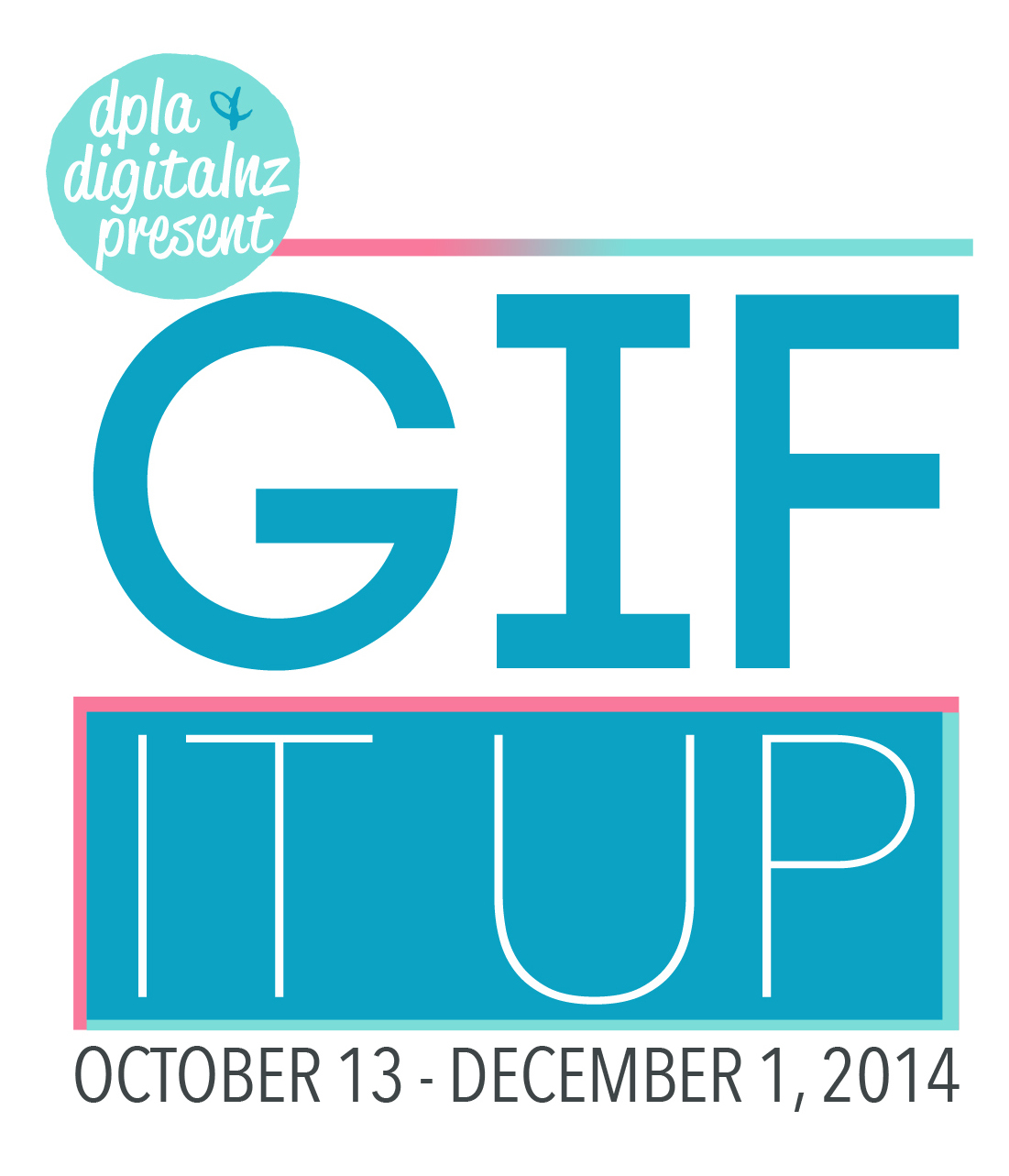 It’s a public domain celebration! The Digital Public Library of America and DigitalNZ are holding GIF IT UP, an international competition over the next six weeks (13 October–1 December, Eastern) to find the best GIFs reusing public domain and openly licensed digital video, images, text, and other material available via our search portals. Winners will have their work featured and celebrated online at the Public Domain Review and also on ... Read more

We’re excited to be collaborating with Digital Art Live on their Emerging Pixels programme this year. Emerging Pixels is a chance for students to develop and deliver an interactive work for the large screen in the Aotea Centre (see the image below). You can check out previous Emerging Pixels works here. 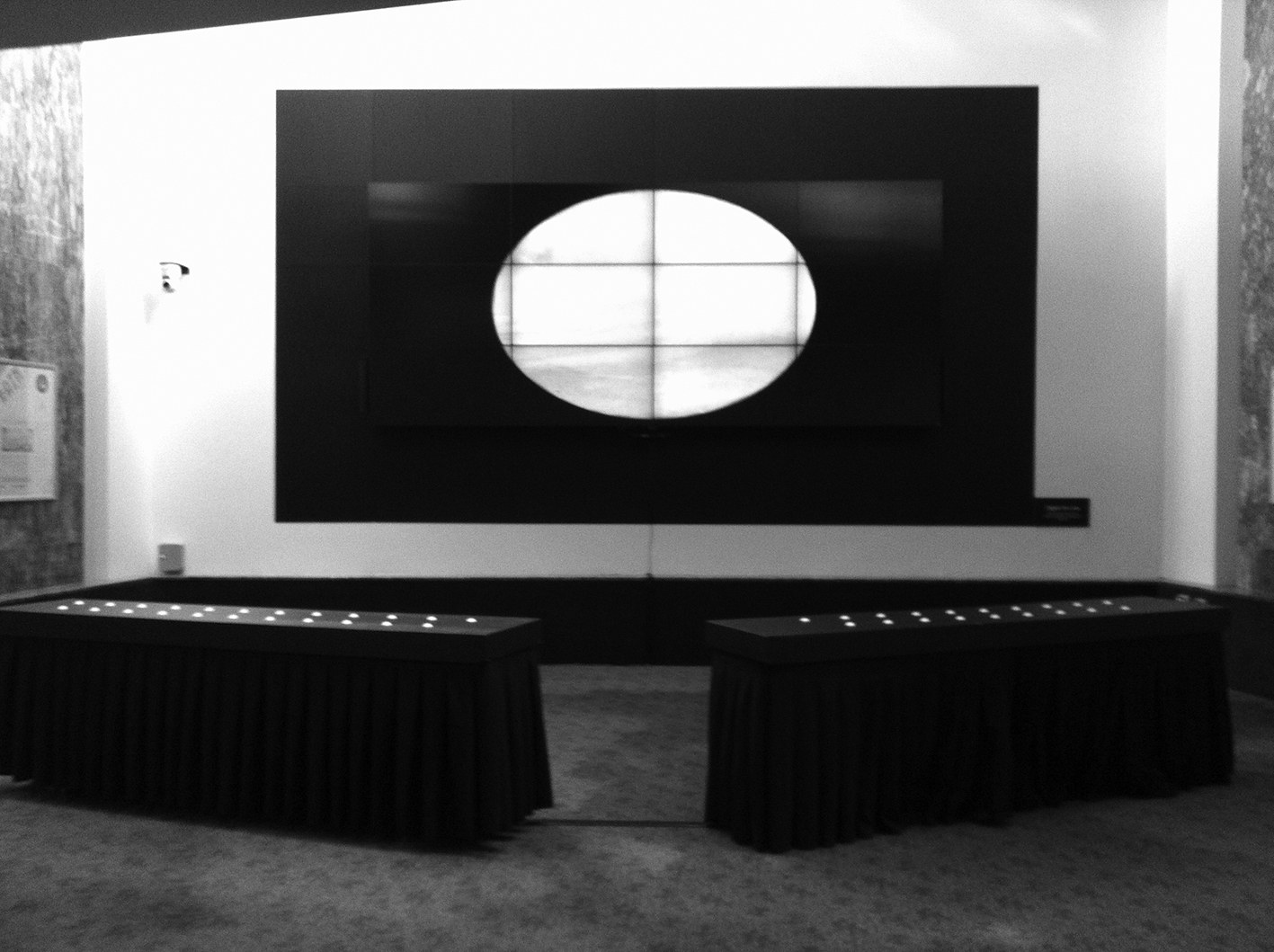 We’re encouraging creative technologies students to use openly licensed content from DigitalNZ in their work, and/or build... Read more

Do you know who's making amazing sets on DigitalNZ? You guys are! 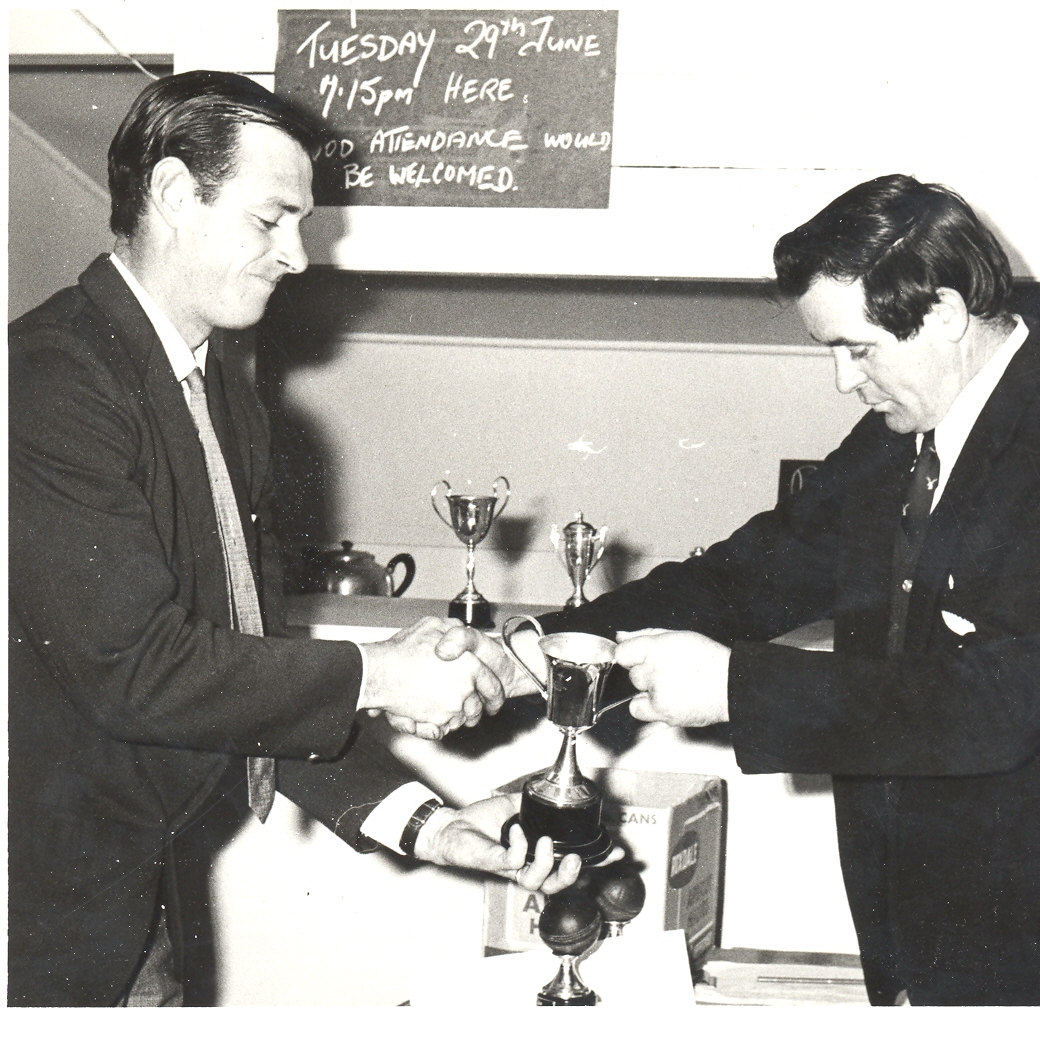 Oh yes, today we reached 2000 searchable sets on DigitalNZ, so we thought we'd list some of funniest, biggest, and most colourful sets that have been made over the two years that sets have been available on DigitalNZ — plus some other categories that we just made up for fun.

If you are a regular www.digitalnz.org visitor, you’ll have noticed a few changes we’ve been rolling out on the site over the last six months or so. We thought it’d be helpful to let you know what we’ve been up to, and also ask for any feedback or thoughts you have about these changes.

Firstly, at the end of last year, we worked with our amazing developers Boost New Media and designers Clicksuite, and made www.digitalnz.org... Read more

It's NZ Music Month and we're celebrating with a special set-making competition!

All you have to do is collect together a DigitalNZ set which represents a kiwi song and you are in to win a sweet prize pack. If you need some inspiration, check out the awesome entries from last year's competition.

To make your set, just login and click the 'Add to sets' button as you search. If you are a first-time... Read more

Donna Robertson is a librarian and editor for the amazing Christchurch City Libraries, and a big DigitalNZ fan and set-maker extraordinaire! In fact, we recently ran a search on DigitalNZ for 'Donna Robertson' and it returned 100 sets. This officially makes Donna 'Queen of DigitalNZ sets'.

In the third of our sixth birthday blog series, we had a chat to Donna about what she loves about DigitalNZ, some tips for making... Read more

This Q&A is the second in our collection of sixth birthday celebration interviews. We thought it was a good opportunity to check in with an organisation using the DigitalNZ's data, in particular our Application Programming Interface (API)*, so we had a chat with UC CEISMIC, a digital repository of information relating to the Christchurch earthquakes. 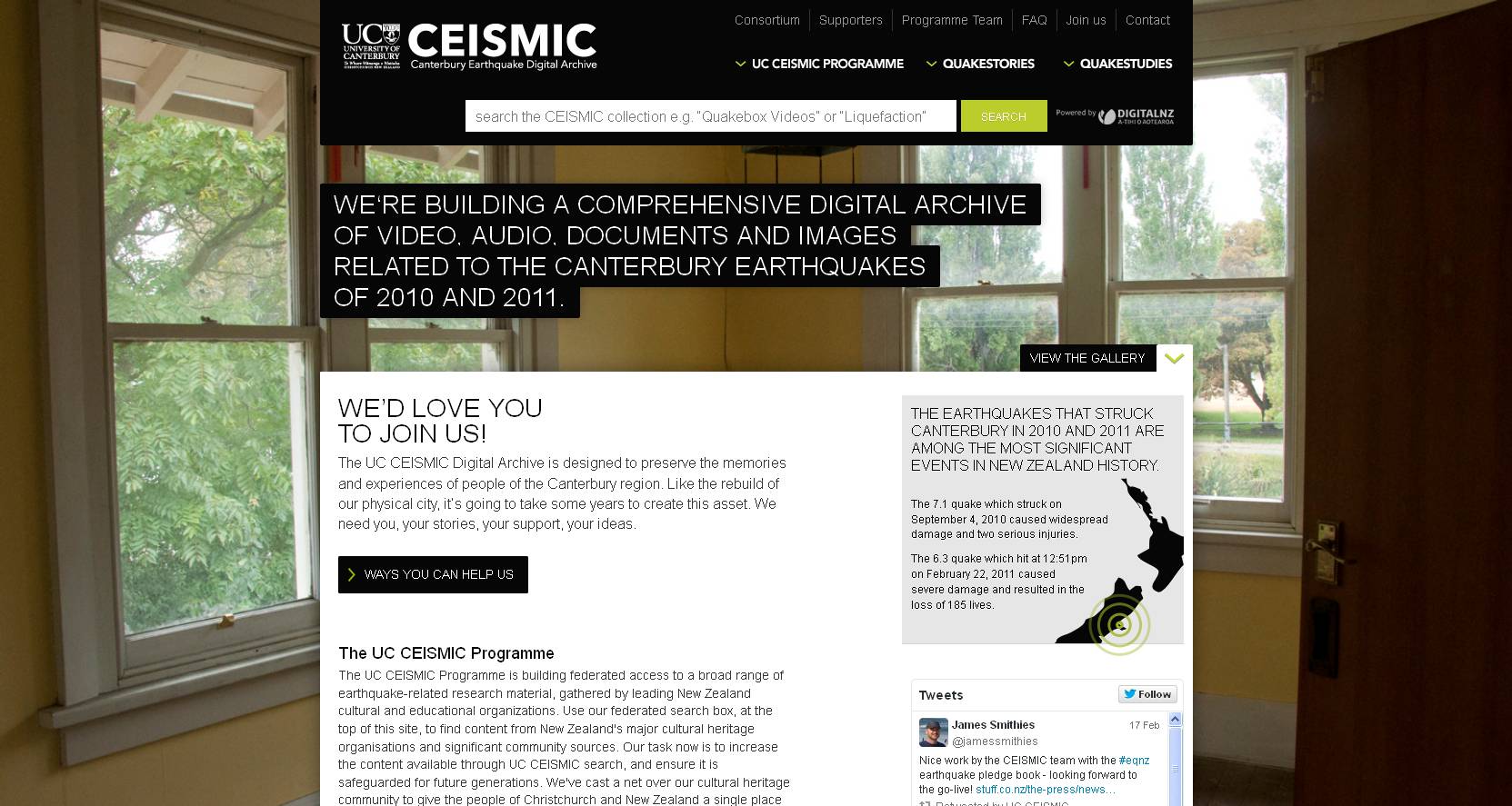 How did UC CEISMIC come to work with the DigitalNZ API?

DigitalNZ is turning six years old this February! As part of our birthday celebrations, we decided it was high time we had a chat with some of our amazing content partners, fans, and people using the DigitalNZ API.

We were keen to get their thoughts on DigitalNZ, how they came to work with us, and what they think will be most exciting about DigitalNZ in the future—also, it's a good excuse for warm fuzzies all round. 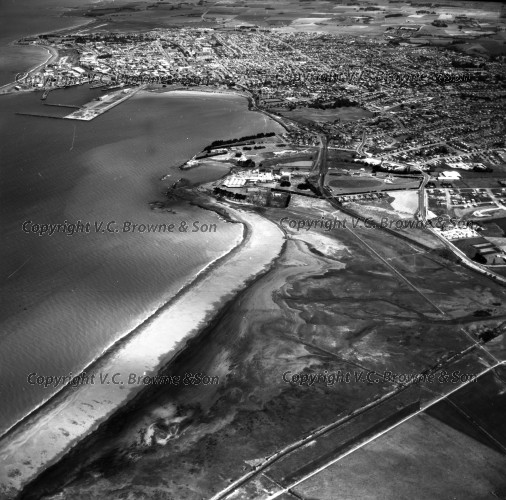 Back in February 2008, the founding DigitalNZ project team was established, and they set about building up the services that we all know and love today. There was a moment early in our life when our identity was nearly all orange and pink — but this early disaster was luckily averted!

We've come a long way since then. We now work with nearly 150 amazing content partners, and bring together over 26 million pieces of digital... Read more

On November 26 I presented a talk on linked data and entity reconciliation at the National Digital Forum held at Te Papa in Wellington. These are my speaker's notes. 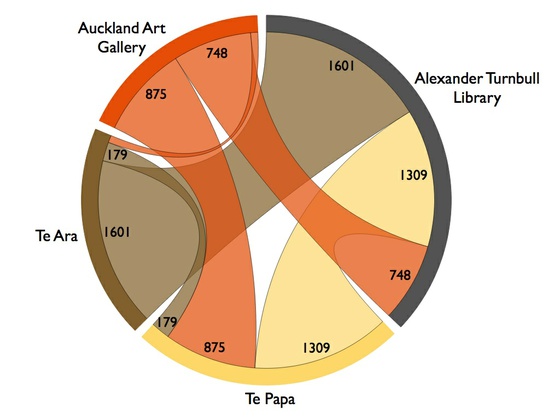 Linked data is an amazing yet elusive idea. It extends the conventional Web by providing a means to identify and refer to specific entities or concepts and supplies a way to describe how those things are related. Together, the... Read more

Mix & Mash 2013 draws to a close and we look back at a year of mashups, remixes and impressive re-use of open content.

Mix & Mash changed tack this year. Instead of big data mashups, we were looking for storytelling skills, and for clever use of openly licensed images, videos, music, and other content to tell compelling... Read more

Recently, we have been lucky to work with the HB Williams Memorial Library in Gisborne to make the Gisborne Photo News available on DigitalNZ. We are now pointing to 14,190 images of life in Gisborne, taken between 1954 and 1975.

The Photo News was a series of monthly publications produced by the Logan Publishing Group in Gisborne, which at its height was distributing to seven regions around New Zealand. Both Nelson... Read more

I recently started working here at DigitalNZ, and quickly discovered my love of set-making. The process is often strange, intuitive and surprising.

DigitalNZ has over 25 million pieces of digital content, so you never quite know what... Read more

This blog post details an interactive visualisation of DigitalNZ data,which you can experiment with as a Google Fusion Table. Note that by defaultthe visualisation will only show about 150 nodes. Increase the number of nodes to the maximum value to see everything.Read on to learn more.

At the time of... Read more

Linked data is an amazing yet elusive idea — elusive for at least two reasons. It can be difficult for people who don't live and breathe linked data to grasp. It also remains difficult for institutions to know where to start in providing linked data views of their collections. At DigitalNZ we have been exploring these issues both internally and with some of our content... Read more

Metadata now available for commercial use

In our latest extension to the DigitalNZ API, we have updated the rights of thousands of metadata* records to allow for commercial use.A treasure trove of over 200,000 records can now be mixed, mashed and mined in anyway you like - be it for commercial, creative or educational purposes. DigitalNZ has millions of records available for reuse, but up until now this has been limited to non-commercial use only.Five... Read more

Puke Ariki is an innovative museum, library and information centre that combines learning, knowledge, resources and heritage objects for a visitor experience that is like no other. Situated in New Plymouth between Mount Taranaki and the Tasman Sea, visitors can connect with the stories of the region’s past, present and future.

DigitalNZ, Creative Commons Aotearoa NZ and the National Library of NZ have proudly announced the winners and selections for the May Showcase of Mix & Mash 2013.

10 amazing works from Kiwis of all ages were hand picked by judges JolisaGracewood, Mark Osborne and Dan Mills toreceiveprizes and go in for Supreme Awards. The collection of tales were singled out for conveying greatstory-lines about the past by remixing or... Read more

For the Music Month of May we called for Setsthat interpret Kiwi songs. And boy did you deliver!

After listening to your favouritetunes from Split Enzto Darcy Clay, music specialists here at the National Library have picked one DigitalNZ Set to win a $50 iTunes prize. And the winner is...

'A thing well made'

Thanks to musical setmaker Richard Robertson, who sent us this stylish representation of theMuttonbirds' haunting tune.