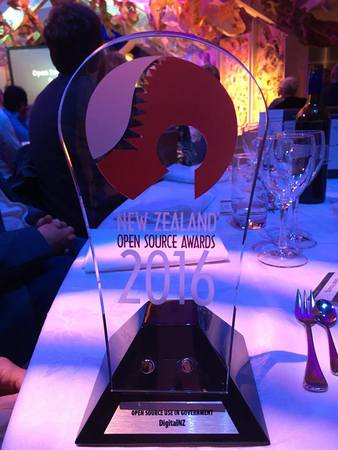 On the 25th of October, a cluster of our DigitalNZ team, present and past, arrived at Te Papa for the Open Source Awards. We were finalists for the third time, and hopeful of a win.

The awards began their life in 2007, and are a biennial celebration of innovative open source projects that are licensed for reuse – a natural fit with DigitalNZ’s ethos.

DigitalNZ opted to use open source technologies from the very beginning, more than eight years ago, when we decided to build our services on top of a fully open stack – this means that we built DigitalNZ on top of software that other people had freely shared. With time we expanded to share our own technology, releasing our Supplejack software to the National Library of Singapore, and then more widely on GitHub.

Supplejack is DigitalNZ’s bespoke tool for aggregating, searching, and sharing metadata records. The technology allows other organisations to pick up and use the aggregation tool and to benefit from sharing metadata.

One of the most satisfying implementations of our software has been from our friends at Ngā Taonga Sound and Vision, who picked up Supplejack and have used it to present their online collections. For us to know that another public agency in New Zealand has been able to use our software, and reuse technology that has already been paid for demonstrates the value of open source government software.

We were finalists in the Open Source use in Government category, and the first category to be announced, so we were left in short suspense before being announced the winner. Andy Neale, Manager DigitalNZ, accepted the award and acknowledged our partners with whom we couldn’t do without. 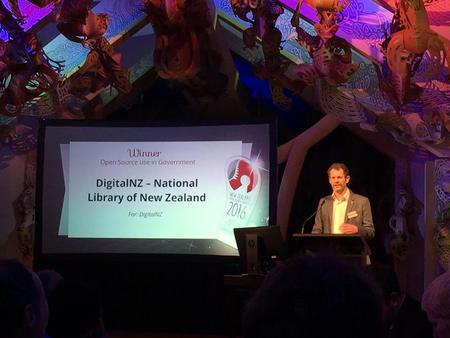 Jason Ryan, the convener of the judges said DigitalNZ wowed the panel with its national and international focus.

“The judges were impressed by the project’s longevity, its commitment to open source from the outset (in 2008 the use of open source was still quite novel in New Zealand government) and its applicability outside New Zealand.”

So, a huge thank you to our partners and especially Boost New Media who have been our development partners for many years; knowing that we have a team of developers who are as passionate about DigitalNZ as we are has been crucial.

To be acknowledged by the Open Source Awards, an independent body means a lot to us; winning this award is special and it encourages us and validates our work – to keep being open.