Digital items relating the Great War Story video about Leonard Hart: http://www.nzhistory.net.nz/media/video/leonard-hart-great-war-story Passchendaele represents the blackest day in New Zealand’s history. Far more New Zealanders died in a few hours on the morning of 12 October 1917 than any other day in the country’s known history. Leonard Hart was one of the New Zealand soldiers engaged in the battle that day. His letter to his parents which was smuggled out to avoid military censorship is the most vivid extant record of the horrors of the battle. See more Great War Stories here http://firstworldwar.govt.nz/great-war-stories 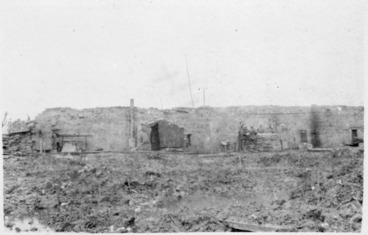 No 51 pill box at Zonnebeke, Belgium

View of the battlefield at Passchendaele, Belgium Gater Point, on the battlefield near Zonnebeke, Ypres Sector, Belgium, during World War I Shell burst at No 6 Track, Passchendaele Gun crew in mud at Passchendaele A captured German pill-box on the Passchendaele battlefield