Walter Smith (Ngāti Kahungunu, 1883-1960) was an influential figure in the development of Māori music and New Zealand music more generally, especially in the early jazz scene.

Born in Nuhaka, he accompanied his uncle and aunt to the United States in 1893 as part of a group of Mormon missionaries. There he grew up to became a highly proficient musician on guitar, banjo and mandolin, later studying music at Brigham Young University in Utah. His professional career began with stints in Ed Montgomery's Royal Hawaiian Quintette and his own Hawaii-Maorian Quintette. In 1913, he returned to New Zealand to teach music at the Māori Agricultural College (near Hastings) and later taught in Auckland from a studio in the Lewis Eady building.

Through the 1920s, Smith led his own highly-successful dance bands in Auckland, including Walter Smith's Jazz Band, the Click-Clack Band, the Aloha Jazz Band, and Walter Smith and His Merry Syncopators. He also led large string bands, such as the 60-strong Aloha Orchestra, and supported the careers of many young musicians.

Smith was also a noted songwriter, composing some songs in English, others with dual Māori-English words, and sometimes utilising the catchy dance rhythms of the day. Probably his most famous composition is 'Beneath the Maori Moon', first published in 1922, and later recorded on Decca by George Nepia, a member of the "Invincibles" All Black rugby team.

This Digital NZ story features a selection of Walter Smith's sheet music, a recording of 'Beneath the Maori Moon' and other related material. It was created for the 2019-2020 National Library exhibition Pūkana! Moments in Māori Performance. Beneath the Māori moon / words and music by Walter Smith. 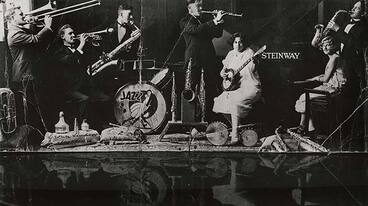 Another audio recording relating to Walter Smith is available through the Ngā Taonga Sound and Vision website, a 1951 radio episode about Smith, Ngā Pao me ngā Pakiwaitara a te Iwi Māori, which includes recordings of his waiata performed by the Nuhaka Maori Choir, Aloha Orchestra, and Nuhaka Trio.