A selection of early 78rpm disc recordings and related material

Performances of Māori waiata are among the earliest commercial audio recordings made in New Zealand. Released during the 1920s and 1930s as 78rpm shellac discs, these records proved very popular with the public.

This Digital NZ story created for the 2019 National Library exhibition Pūkana! Moments in Māori Performance features a selection of digitised early recordings, along with some related material. Following the links below will take you to the item record, then to the National Library website, where clicking on "Listen to this item" will allow you to hear the audio. Please note that due to the age and condition of some discs, sound quality varies.

New Zealand's first commercial records were of performances by Ana Matawhaura Hato (Tūhourangi, Ngāti Whakaue, 1907-1953) and her cousin Deane Waretini (Tūhourangi, 1905?-1967), recorded in Rotorua in 1927 by the Australian branch of Parlophone. A few years later they travelled to Sydney to record more discs. Such were the popularity of Hato's and Waretini's recordings that they remained in print until the mid-1950s. Hoea ra te waka nei (Canoe song) and, Haere mai Te Arawa (Welcome song to the Māoris of the Arawa Tribe when they returned from the Great War) : pa...

An historic session also occurred in April 1930 with the recording of members of the Rotorua Māori Choir by engineers from the  Columbia Graphophone Company. The musical director was pianist Gil Dech. As well as choral items by the entire group, Columbia recorded performances by soloists such as Te Mauri Meihana and Mere Amohau, and the Rotorua Māori Male Quartette. The recordings were initially released on shellac discs which remained in print for many years, and were later compiled on equally-popular 10" and 12" LPs. Read an account of the recording session in this 1961 article by Allen Armstrong in Te Ao Hou.

RECORDS Still Popular after Thirty Years; How Rotorua Club Made First Recordings of Maori Music; THE AIM WAS PERFECTION; MAKING THE DISCS; GIFT OF ... 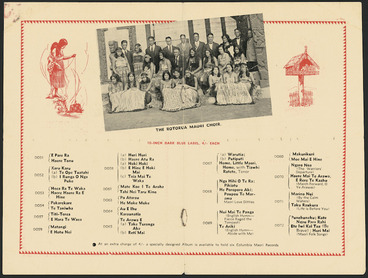 Another set of historic recordings were made in 1930 by members of the Tahiwi whānau of Ōtaki. Many of the songs they performed were written by Kingi Te Ahoaho Tahiwi (Ngāti Raukawa, Ngāti Whakaue, 1883-1948), who used a five-string banjo for composing much of his music. In 1930, Kingi Tahiwi's siblings Henare, Hinehou and Weno Tahiwi travelled to Sydney to make a number of recordings for Parlophone, backed by a studio band. The resulting discs included Kingi's waiata, a waiata by Te Puea Herangi ('E noho e Rata', a.k.a. 'Waikato'), traditional items, and English-language popular songs. Waikato ; Puru taitama traditional ; [performed by] The Tahiwis ; accompaniment by The Rhythmic Three.

A number of other Māori and Pākehā singers made early 78rpm disc recordings of waiata. These performers included the New Zealand-born soprano Rosina Buckman (1881-1948), who recorded 'Waiata Māori' (written by Alfred Hill), and George Nepia (Ngati Rakaipaaka, 1905?-1986), a member of the famous 'Invincibles' All Black rugby team, who recorded 'Beneath the Māori Moon' (written by Walter Smith), 'Pōkarekare' and 'Haere rā'. Several discs were also recorded in Sydney by one Hōhepa Porourangi, whose identity remains unclear. The final disc in this selection is a 1949 HMV release by Inia Te Wiata (Ngāti Raukawa, 1915-1971), performing 'Pōkarekare' and 'Hine e hine'.

More items will be added to this collection as they are digitised.